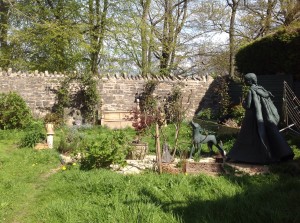 Watching the newly leafing trees on the way from the airport yesterday I went back in time to the first time I came to Glastonbury in late April of 1990.   The April green is different that the May green of this verdant land.  It feels new, promising, a harbinger of all that is alive,all that is Viriditas.  A line from a Neil Young song echoed…all my changes were here .  So many times I have discovered and remembered here.  Pilgrimage makes me wake up, pay attention, savor.

This place where I have faithfully returned all these years and brought beloved friends for the last 15, meets me with that green, with the wren song, with the tiny purple flowers that tumble over the stone walls.  Avalon meets me in the eyes of old friends, the rusty water of the well, and with the steam of spirit that runs thru time from the ancient goddess ofthe holy Tor all the way to the weave of esoteric Christianity and love of Earth.  Ahi, Blessed Be Amen, Namaste. 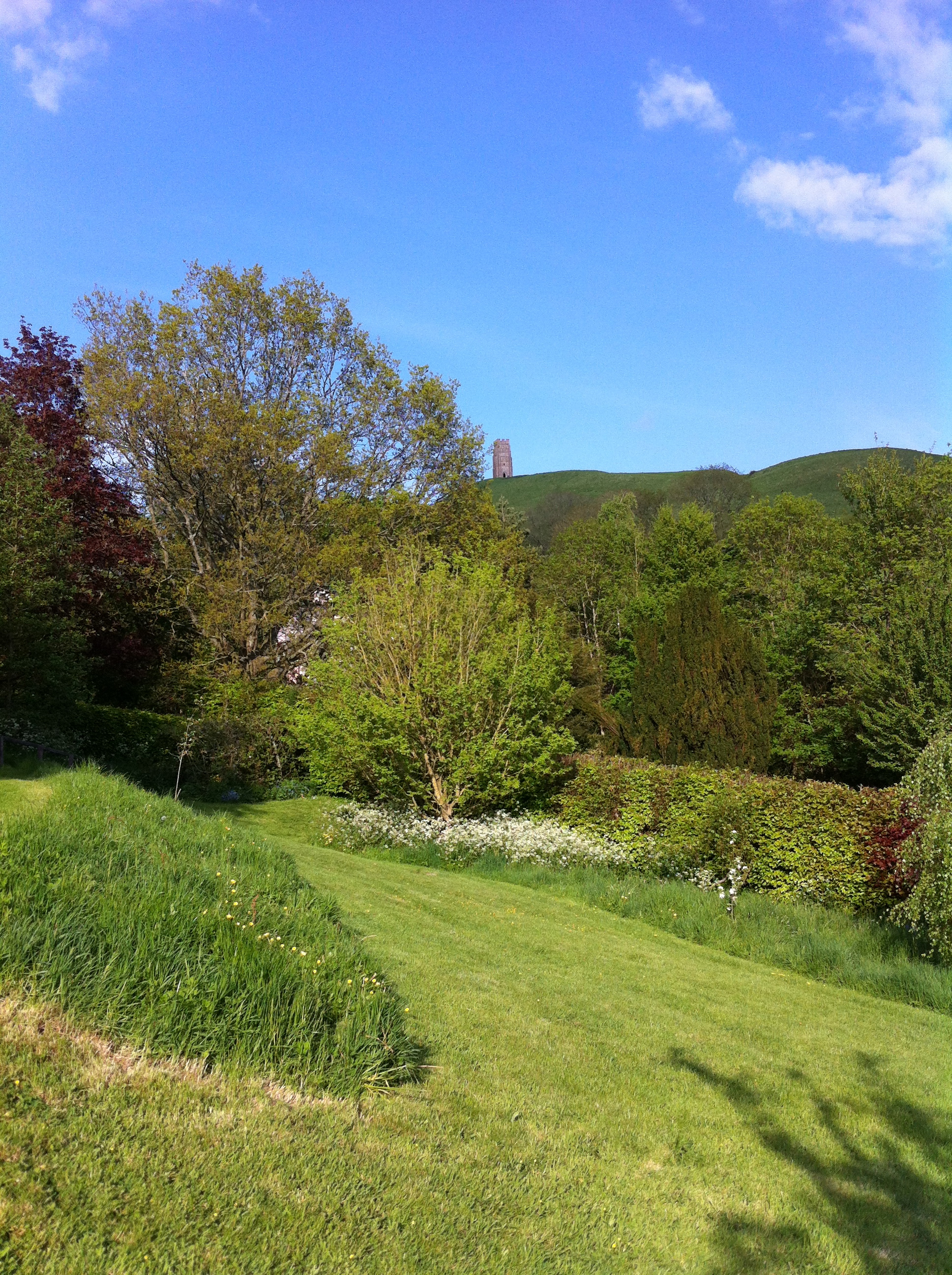 I’m just back a week from my yearly pilgrimage to Chartres and Avalon.  I am always reminded of the gifts that these places give me.  I feel renewed, nourished and inspired like I have just visited a revered spiritual teacher.

Darshan of Place
Ley lines quickening,
Their harmonic reminding me.
Thresholds appear
I cross over
Into wonder

How many layers are there in these holy places?
How many times have I
Fallen headlong
Into mystery
Grateful for the tumbling nature
of Love?

High summer in Glastonbury, home of my heart and soul! Our Pilgrimage to Avalon arrived in time for the Queen’s Jubilee celebrating sixty years of her reign. We were all celebrating Elizabeth, that sturdy, dutiful archetype of constancy and stability with her jewels and corgis and ever present handbag—could anyone ever guess what feelings rise and fall in her? Still even in pagan Glastonbury—the Isle of Avalon—flags were raised, windows bedecked with the colors of the realm. The mood was jolly and warm.

The weather on the eve of the Jubilee was bright and clear unlike the days before and after. Someone said that God’s “inbox”was full of requests for fair weather. All day we noticed signs of preparation for the evening’s march up the Tor—the iconic hill that dominates the landscape. When our group ascended the Tor in the morning we saw torches set up along a spiral path to the top and a beacon filled with logs at the ready to burn, joining similar tributes on high places throughout England. Ancient fire would mark this holiday.

We attended a concert at the Chalice Well Garden, waiting out the long dusk and then joined the throng on the High street at 9:15 pm. Hundreds of people drummed and danced and strode up through the shops and onto the main road. We were squeezed into a four person wide column as we began to see the torchlit path ahead. Children and elders, hippies and football fans walked up the steep path, chatting, laughing, remembering perhaps that our kind has always ascended to the high places in celebration. Swept up in the crowd, our group of five strayed away from each other—part of a larger circle. Close to the top we heard cheers and then a stirring rendition of God Save the Queen! It was thrilling, timeless, jubilant.

Two of us were still together and we knew that intrepid Maia might have tried to come up on her own. Maia is legally blind and travels with Tessa, her golden guide dog. She has traveled the world alone. She had not wanted to come to the High Street part of the march and we thought that she may have accompanied Joan back to our B&B. Imagine our collective surprise when we all found each other at the very top of the Tor near the St. Michael tower and there was Maia. Relieved, the tour leader in me then began to wonder how we would all make it back down the path in the increasing darkness. “Not to worry” said Maia, “I happen to have 7 LED flash lights in my pack!” It was not the last time that we were saved by our blind sister.

Giddy, we took the back way down the Tor, marveling at the yellow full moon rising and the spiral of torches burning along the path. We walked by the ancient hedgerow in the pleasant summer evening, knowing that we had participated in aritual as old as time, thoroughly, happily in the land of the soul.