Now is it 18 days before I begin my next odyssey to England, France, Poland and Wales.   I still feel the vast expanse of Argentina in my heart, the dear friends of the Quest in Santa Fe whispering in my ear, and the profound experience of playing Mother Mary in my friend Kayleen Asbo’s  Passion Play, The Passion of Mary Magdalene.  For me, Mary is the embodiment of mercy, grace and love.  For years I have prayed to her, visited her in her many manifestations, particularly at Chartres, sung her praises.  To don a blue veil woven of silk, cotton and linen created by my great friend Kay,  and to be her, was to enter into a communion and a responsibility.  I know that it is she who will accompany me on this next part of my journey….  she always has.

I look forward to Avalon and to being in the Chalice Well Garden Retreat House.  The group of women coming are lovely and seeking.  I will feel the familiar homecoming and delight in the high vibration of green and beautiful Glastonbury.  I look forward to being in Chartres as well ,first teaching a daylong class on Mary and then being on staff for a week with John Phillip Newell.  We will walk the candlelit labyrinth in familiar wonder.

It is the next part of the journey that makes me feel like a pilgrim.  I will go to Warsaw and present the Women’s Dream Quest–WIELKIE ŚNIENIE KOBIET– in Polish– or literally, the Big Dreaming of Women.  Many women have signed up and my host has done an amazing job of calling the circle.  I am so moved that my work will be translated and that women the world over  are called to the Heroine’s Journey.

After the Quest, my hosts will accompany me to Krakow and to  Czestochowa to see the Black Madonna.  I will also visit Auschwitz.  I will go to bear witness, to stand in the place that has come to symbolize evil, to experience what is there for me to experience.  I have read a lot about Poland’s  history in the last while – the ravages of empires, the senseless slaughter of unthinkable numbers of human beings.  I can only imagine what it will feel like.  It is then that I will call on the vast expanse of Argentina- where ironically so many fled.  I will call on the love of circles upon circles that I belong to.  I will call on Mary, simple, kind and brave.

The sacred mountain, Uritorco, guards the valley where we built the La Falda, Argentina labyrinth in the week of the Equinox this year. It is a lush valley, green and full of vegetation, trees unfamiliar to northern eyes and full of a small tumbleweed- like plant that arrives on the wind and adheres to telephone lines and branches. The sky is delicately lit by the receding sun of this time of year– very blue and at night clear and full of the Southern stars.

Fourteen of us – Veriditas board members, friends and spouses, our designer John and his labyrinth painting partner — have left our usual lives to become workers for a week – to lay pavers in the sand, to design the patterns of the path, and to level it all. A professional mason will come along after our work and cement it all in place. This is a legacy labyrinth, funded by a foundation associated with the Alla Arriba Retreat Center in La Falda in cooperation with the local municipality. We have been given a large area of the town square to create this camino of meditation and peace.

We all came with sense of mission. Chris Katzenmeyer, Veriditas Board member and project manager, followed her intuition to the idea of a Legacy Labyrinth- built by those of us closely associated with the labyrinth and continued to follow her excitement when the request for such a labyrinth came from Argentina. The beauty of her vision lighted the way for us all.

Some of us had been captivated by the idea that this town had once had its share of Nazi refugees seeking the new world after WWII. We hoped that our labyrinth would be useful in helping people come together, reconciling old hatreds, bringing healing. Others of us were excited to bring the labyrinth to South America. We all sensed a new direction for Veriditas. This would be a project of service and new people would learn to use our beloved path.

What we accomplished in our week of work was manifold. Certainly we created a stunning labyrinth that radiates peace and love. We worked hard and were observed by hundreds of townsfolk over the course of the week. They were moved by our efforts and showed up at the inauguration curious and grateful. And other things happened:.

We created community among ourselves. Many of us have know each other for years and have worked in producing programs in the states and in Chartres where we connect with our minds and spirits. Here we worked with our hands- everyone according to their ability. There were no slackers among us and seeing each other on the ground, carrying heavy stones, sandy, wet, sore brought us all to a very simple, humble and human state.

Our hosts at Alla Arriba generously gifted us with experiences of music, Tango lessons and a temescal- a South American version of the Sweat Lodge. For me, this experience anchored our work in the indigenous world. As a sweat is designed to do, it installed in us the elements of earth, fire, water and air, taking us subliminally to the basis of our connection to Life. Singing songs from the local Mapuche people as well as songs in Lakota, Spanish and English, we were invited into a world without borders where our unvoiced longings could be sung into the womb of Pachamama, our Earth mother.

I sensed the vast expanse of the South American continent less touched by the hand of Western Civilization—wild and free. In my imaginal world, I honed in on a place north west of where we were in the Southern Andes and sensed a call to explore there. This dream like experience beyond my reasonable mind has stayed with me and calls to me. It also installed a sense of the mystical Mother of all things in her Andean guise. She became present for me and it became clear that She wanted this labyrinth here is this heartland.

In my spiritual life, I have explored many paths of heart. In my youth, I was captured by the Plains Indians’ stories and in years of wilderness exploration, grew to know the indigenous world in my bones. Since the early 1990’s my focus has been on my ancestral lands, pilgrimages to the celtic world. The labyrinth came into my mind and heart around this time and with it a path into the beauties of the mystical Christian story. I have always known the labyrinth to be an archetype of integration. It is my dependable companion on the journey to the land of the soul. But this trip has bought the labyrinth full circle into the realm of the four directions. As I walked into each quadrant on stones I had helped to lay, I sensed a weaving of the qualities of the North, South, East and West. In that inherently integrative experience, the labyrinth marks a portal into the mystery. It prepares us for a consciousness of wholeness that opens us to healing. 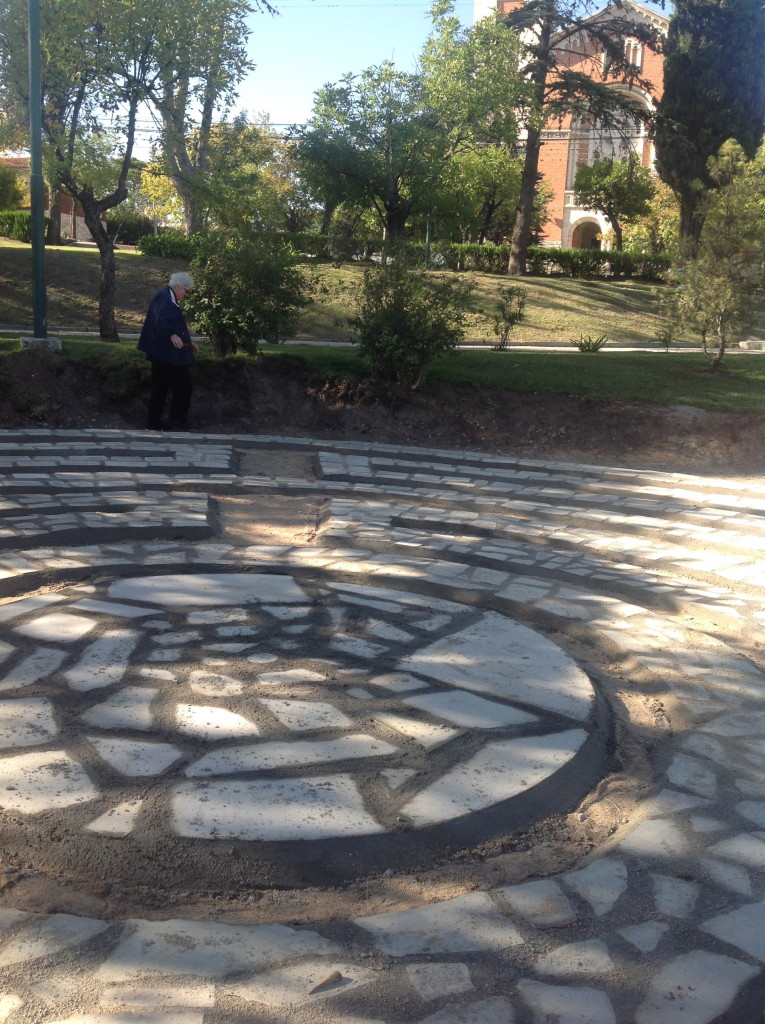 I stood on the La Falda labyrinth on the Equinox. John, her designer, stood in the center. He stretched his arms out and the setting moon and rising sun landed in each palm, equidistant from the horizon. I sent my prayers northward to the Deer Heart Labyrinth in Petaluma, California, sensing the bridge between the North and South, strong and clear– praying for the connections between the continents to be equally strong and clear, imagining the bridge over the seas to the north and east, to Chartres and the thousands of bridges linking labyrinths the world over; the web of connections between these portals of integration and wholeness—the web of connections between us all. 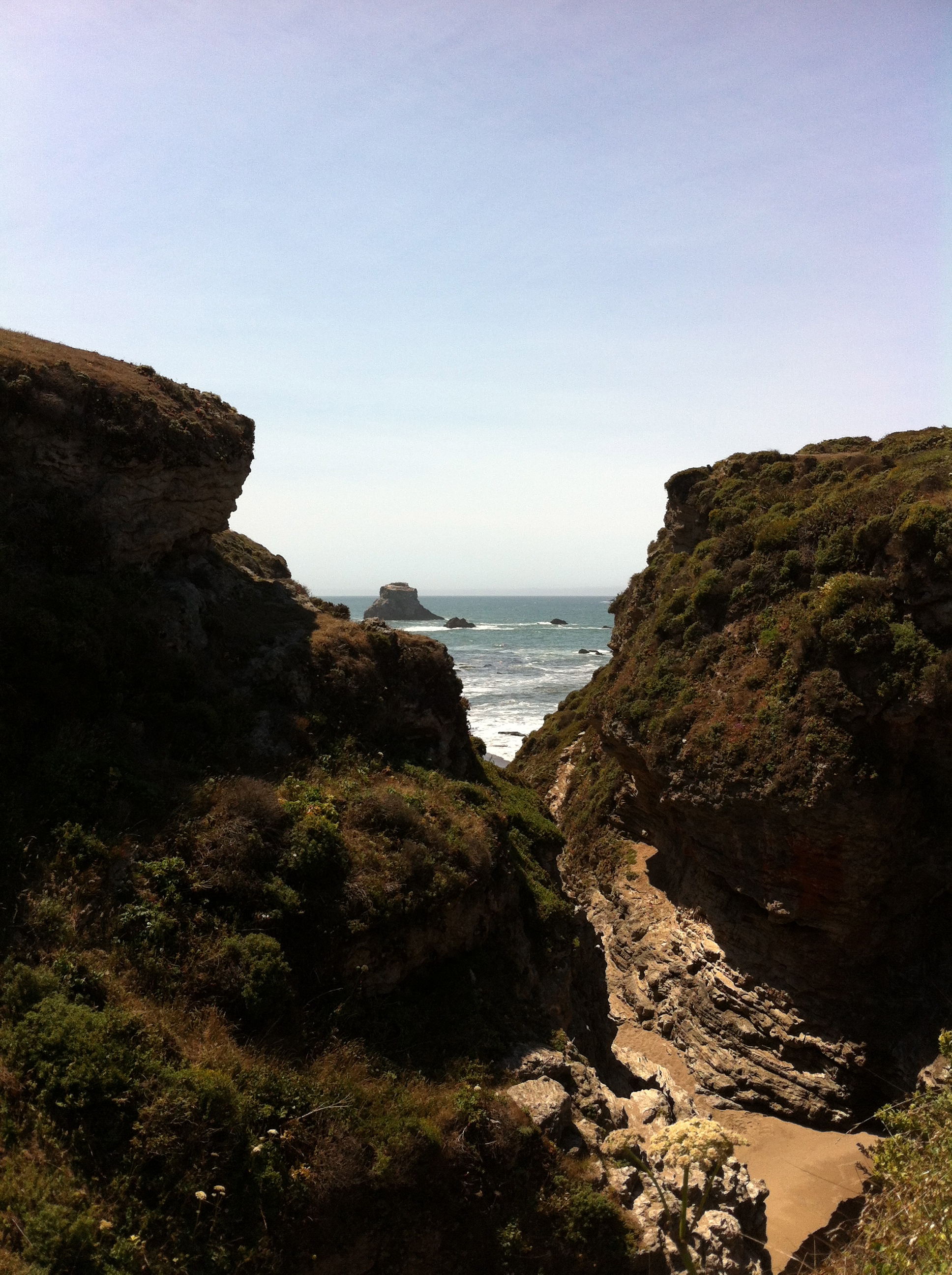 It is full on summer here in Woodacre.  I decided to go out to Pt. Reyes to find the ocean breeze and to walk long and far.  The Bear Valley trail is a beautiful 8.5 mile round trip  that goes goes through old forest, meadows and ends at the Pacific.  I started early enough that I had long stretches all by myself.  The dappled light through the forest canopy and the rich earthy smells of a watershed were a balm to my soul.  After the first couple of miles the outlines of two of the workshops I am currently planning came effortlessly to my consciousness.   New ideas floated in like the little blue butterflies who accompanied my walk.    I have to do this more often, I thought.  Much is solved by walking.

On the beach, I thought about my friend, Joan, providing safety for the Pride Parade in San Francisco, 20 miles and a world away down the coast at this moment.  Such joy this week has brought with Marriage Equality!  Much was solved by many people walking in 42 years of parades  and political actions and their  fidelity to this latest in the liberation movements of our time.

And then my mind and heart turned to Nelson Mandela as it has so frequently this week.  I know of no greater hero.   It seems fitting that Barack Obama is visiting at this moment close to his transition.  I pray for his ease-full  passage, pray that the great energy of love and tenacity, walking step by step for equality, freedom, peace and reconciliation  will pass to us as his parting gift.

May we all walk with Pride.