The following piece as been waiting  unfinished since before the Solstice.  That turn has come, the holidays have given their warmth and lightening and now, I send it as a hope for how we proceed in the New Year.

The book,  Dark Times Filled with Light, by Argentine writer,  Juan Gelman. has been sitting on my bedside table all during the months of November with its plunge into the abyss. I bought this before my trip to Argentina in 2014 to get a poetic feel of a country plagued by political and cultural strife  Now as Advent deep and cold, nears it Apogee, just past the turn of Solstice, I find a little time to write and ponder.

Besides Hillary’s stunning defeat and the real fear and loathing that so many of us feel as we watch a dystopian novel unfold before our eyes, there is also like the book title tells us, Light.    Every time this thought crosses my mind, I pledge to notice it, infuse it with hope and await its meaning.

But first the dark.  It ‘s time is here.  Beloved Leonard Cohen, who exited just a moment after the election left us with “You want it Darker” .  a song that to my listening, says: clearly, God, you want it darker, I’ll turn off the light.  In the chorus he chants the Hebrew,  I am here, which I take to mean,  being with, abiding,  I don’t know enough about staying with the dark, difficult, unresolved.  And that is the only thing this moment has clearly called for.  I don’t think that it has been time to dig deep for compassion or to try to make a hellish, ignorant situation brighter by good works or by  any of the tricks my personal history has taught me.  It is time to abide.

That said and experienced,  I found that Light emerged.  Deeper conversations, solidarity, shared grief, something warm and glowing right where the psychic blow landed in my solar plexus.  I’ve had Ideas for action for Standing Rock, an incipient call to a virtual circle to hold all of this , the dependable through-line of my work planned through the world next year.  This isn’t blinding, blissful light, but clarity and love and the sort of inextinguishable presence that we need just now.

In mid December, Lauren Artress and I presented a workshop on ritual and ceremony on the labyrinth.  One of our elements was sending everyone into the cold, dark night to find their luminata.  These luminata were made with cutout bags, sand and small LED lights ( no fire due to regulations).  The glow of those luminata and the need for each of us to find our own, has sustained me through the season.

May you find that glow somewhere in your solar plexus as we go on in this next uncertain year.  May 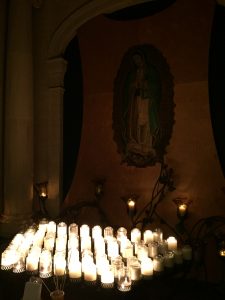 we meet in ceremony, in the circle, in the heart now and always.