I have been back just over two weeks from Australia.  I have been noticing the brew my psyche is preparing of my experiences.  I worked with 60 pilgrims in the land of the soul over the course of 5 different workshops and and then I met Uluru and Kata Tjuta, the great stone beings of central Australia.  I  feel something new in me and I would have to say that there is another note in the chord of my life–subtle, grounded, quietly joyful.

My friend  Marg and I made the pilgrimage to the “Red .Centre” after the Melbourne Womens’ Dream Quest.  We flew to the dusty town of Alice Springs and drove west out through the desert for 5 hours toward a simple resort 15 kilometers from the monuments.  Vast desert landscape met us and few other vehicles.  We saw just prickly desert plants, sun and blue sky. As we came nearer to the Uluru-Kata Tjuta National park, the landscape changed.  There were more desert trees standing solitary witness and the atmosphere slowly became numinous.

We arrived just in time for sunset and joined the throng of  people from all over the world at a specially dedicated spot for viewing.  Mercifully the tour busses had their own vantage point.  It was a festive atmosphere.  I could hear Italian and German spoken in hushed tones .  What surprised me was how related I felt to the great sandstone being in front of me.  I felt joyful and friendly.  I quickly drew a small 7 circuit labyrinth in the red dirt in front of me

It seemed a fitting symbol of the journey I had made to come to this Center and an homage to the wandering Aboriginal people who used to roam this land also coming to this Center.

Soon enough the light began to leave the sky and Uluru changed from a rather bright rusty red to deeper crimson.

All visitors had to leave the park by 7:30 and so we humans made their way back to our accommodation in the resort.

Before dawn the next morning, we drove out to greet Kata Tjuta, Uluru’s companion .Again an international crew joined us, clicking and exclaiming.  As soon as the sun rose over Uluru and

painted Kata Tjuta with the subtle tones of sunrise, the other tourists left and we were free to commune and be in silence.

We next made our way toward Kata Tjuta and a hike into Walpa Gorge.  We walked up the gully, wild wind blowing through the only aperture in the wide open desert.  We encountered a lush river of green trees and shrubs nourished by an underground spring and protected from the harsh desert on all sides.  The Anagu people, the traditional owners of this country came to this spot as a pilgrimage.  Kata Tjuta is sacred to the Anagu men. 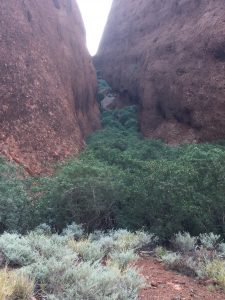 It became clear to me  that the shapes of the landscape and the fecundity of the gorge would remind any human of the sacred gifts of women. Perhaps Anagu men came here to learn.

Next we circumambulated Uluru.  I had brought a stone from Deer Heart labyrinth to leave as an offering.  I found the place that called and sat for a while connecting the two places and the network of labyrinths all over the world.

Everything about these places felt simple and primal.  I could imagine our long time ancestors listening to the landscape, going about their lives in a harmony that we cannot imagine in the modern world.  The harshness of the climate out here, the necessity of learning where and how to survive, the imaginal richness of the night sky and the parade of colors greeting the dawn and dusk all taught them how to be in right relation to Land and each other.

When we left the next day, I grieved.  I was touched to the core.  As we drove the 5 hours back to Alice Springs, there was a particular spot on the road where I felt the boundary of the pull of Uluru and Kata Tjuta.  It is for good reason that this place is considered one of the chakra points of our planet.  I felt gratitude for the attunement.

Coming back to my work and meeting with the next circle in Alice Springs, I experienced an increase in my ability to hold Earth  and more credibility to encourage others to feel our special human job of bridging Heaven and Earth while standing in love and awareness in the Circle.