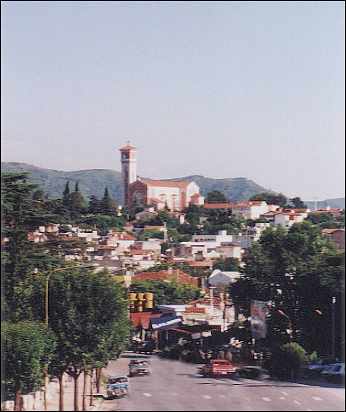 I sit here at the overlook, dun colored grasses still pervading the very dry beginning of winter. I look far to see where I might be going this year. I think that my life has come to the point where I can be a surveyor of the territory ahead, just like I can see to the rocky outcroppings on my way to Petaluma and marvel at the thoughts and feelings that come my way on the inner road.

This year I will journey to Argentina. The board of Veriditas is building a labyrinth in the city park of La Falda, brought there by a family who owns a nearby retreat center. They suspect that this lovely path of wholeness will be useful to the people whose reconciliation with their past lies in the shadows. I read up on Nazis in Argentina. There are wild stories- Hitler lived out his life in Patagonia, there was a secret organization named Odessa that funneled SS men into the friendly dictatorship of Peron in the late 40s– Conspiracy all around. However careful documentation by journalists and scholars point to several famous war criminals being found in Buenas Aires or the pampas grasslands or the Patagonian mountains and shipped back to Israel to be tried as well as the presence of hundreds of other Nazis who blended into Argentine society.

The families of these refugees have lived in Argentina for nearly 60 years. Who are they? Who knows about their past? Who merely feels the energy that comes when people escape their viscous pasts and settle down in a new world. Our hosts who have requested a labyrinth, want to do something about what they have felt in their community. This notion intrigues me. I have traveled to many places where I have felt a turbulent energy long before I was told a massacre or battle occurred there. I am sensitive to these things and very interested in understanding what can be done to bring peace and harmony to the places, people and institutions that live in them. It seems that the labyrinth is the perfect tool for such work.

I think of my friend Jill Geffrion’s work in Rwanda and Congo, simply building a labyrinth in the vacant lot behind a church, encouraging people who have harmed each other in ethnic violence to simply walk together. Places in Africa are open to this way of working. .Nelson Mandela has given us the concept of truth and reconciliation. Moreover he lived that razor’s edge path of learning about your enemies and reconciling. I have been heartened by this imperfect and difficult path because it parallels all I know about good psychotherapy. It helps to tell the truth, to confront the horrors of one’s past, to attend the shadow. There is work to be done in this vein, and symbolic, body oriented, spiritually tethered tools can help.

I heard reporting about Ariel Sharon’s death last Monday morning. It strikes me as odd that a man so wedded to war, so against reconciliation, would stay around for 8 years in a coma. It seemed a fitting metaphor for the kind of position that does not seek reconciliation, but is so very wounded that stubborn retribution is all that makes sense. I know that I am simplifying, but the intransigent struggles around the planet- Israelis and Palestinians, Sunnis and Shia, the Isalamist and Christian parties in South Sudan, etc, are all based in the retribution model, remembering the ages old hatreds, reviving the past horror, justifying current behavior because someone did something just as awful to your great grandfather. The shadow becomes energized, righteousness prevails, a perverse logic dictates continued conflict.

So the other interesting thing about Argentina is that it is home to the 7th largest Jewish community in the world. Jews emigrated to Argentina starting in 1492, and have come to the new world fleeing the Explulsion, the Inquisition,pogroms throghout Europe/ Russia. Argentina did admit a large number of Jewish refugees in the beginning of Hitler’s rise, but Peron was more interested in the Nazi immigrants in the late 40s. Our host say that the opposing sides of the Nazi Holocaust have lived side by side in this generation. And this generation has seen hideous dictatorship, atrocities, and corruption. Not exactly the atmosphere for reconciliation.

Our hosts say that you can feel the tension in the landscape. I will be very curious to see what I experience. And regardless of that, I will put my stones into the ground, form the the paths of the labyrinth, and hope that this effort makes a difference.